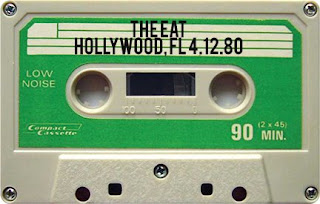 The Eat formed in 1978 and were one of only a handful of punk groups in Southern Florida. Existing in an era and region that only allowed for performances by compliant cover bands, the Eat gigged defiantly in opposition to the cultural status quo. The band released two fantastic singles: “Communist Radio” in 1979 and “God Punishes the Eat” in 1980. Tracks from these records have been compiled on two different “Killed By Death” compilations and have commanded collector’s prices for years. In 1982 the band also released the lesser know but still great “Scattered Wahoo Action” cassette on Jeterboy.

This rare live set demonstrates what it was like to witness the Eat right when their classic “God Punishes” EP was released. I obtained my recording from the master tape so this is the cleanest copy available of this show. The band simply tears it apart. The Eat seem like the type of punk band that were into technical rock and roll before they discovered punk rock. One clue to this hypothesis is the inclusion of “LA Woman” by the Doors. Any other teenage punk worth their weight in airplane glue would have never chosen such a square cover song to perform live. Other cover songs include Sam the Sham and the Pharaohs, the Seeds, and the Clash. Overall, the playing on this recording is proficient and unyielding. The tape is slightly damaged during “Kneecapin”. This show is a must for any “Killed By Death” enthusiast.