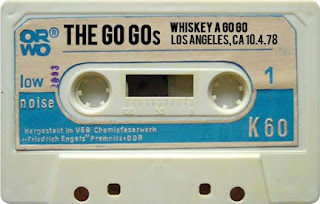 Despite their ubiquitous presence in the annals of new wave and 1980s cultural consciousness, the Go-Go’s began life as a punk rock group. Sharing the same circuit as influential Los Angeles punk groups such as X (they shared a rehearsal spot with them early on), the Germs (Belinda Carlisle was even a transitional early member under the pseudonym of “Dottie Danger”), the first 18 months of the band showed they hadn’t yet reached the seraphic lullabies of their debut album and what was to follow. This lineup featured Belinda Carlisle (vocals), Jane Wiedlin (guitar, vocals), Margot Olaverra (bass), and Elissa Bello (drums). They were a Masque stage mainstay and lived at the Canterbury Apartments, a Los Angeles punk flophouse hangout for key scene players and a variety of criminals, pimps, junkies, newly arrived immigrants, and crazies.
Here they are in all of their coats of glorious baby fat, the Go-Go’s in their infancy, way before they were a visual 1980s new wave affirmative action outfit featuring an array of two sassy punk rockers, two cheerleaders, and one tomboyish metalhead. This performance was recorded live on stage at the world famous Whiskey a Go-Go (fitting, isn’t it?) located in West Hollywood. Perhaps what is most interesting is how this shows you the great contrast between what the group was when they started when compared to when they gained mainstream prominence.
The recording is from an audience source and the quality is rough but listenable. This show consists of several unreleased tracks that have not been (officially) reissued in any form. Part of this show has been bootlegged onto vinyl as a double 7” entitled “Kellogg’s Punk Tarts”.
Track list:
1. We're Here Now
2. B-Movie
3. London Boys
4. Robert Hilburn
5. (Remember) Walking In The Sand
6. Don't Hang Up
7. Fashion Seeker
8. Screaming
9. Party Pose
10. Our Time Has Come
11. Just A Number
12. Living at the Canterbury
DOWNLOAD:
http://www.mediafire.com/?wkv1vd69jhse5cb
Posted by Chris Prorock at 10:44 AM 3 comments