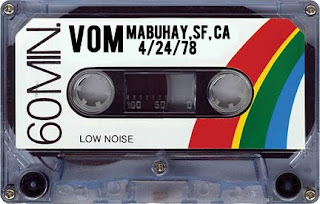 I’d be wiling to bet my bottom Quaalude that the emblematic naissance of the Los Angeles punk scene originated from Richard Meltzer’s arrival from New York sometime in early 1976. After reading his anti-intellectualist prose in ‘72’s Gulcher, it’s obvious to me that he was bound to actualize himself as the thinking man’s Peter Laughner. This type of lowbrow deconstruction was also ostensible when Meltzer was hired as the master of ceremonies for the final Sex Pistols gig at the Winterland during the start of ’78. Based on an earlier altercation, the show’s promoter barred him from the club. In an act of mythic proportions, Meltzer purportedly turned his leather jacket inside out, slinked past Graham and let loose an inundation of profanities onstage. This brand of treachery toward the farty old dinosaurs was utilized more like a weapon in the seminally brilliant punk group Vom.
The funniest thing about Vom (short for “vomit” of course) was that they were profoundly unfunny on a level that kitsch had not progressed (regressed?) to in Hollywood yet. This self-described “beat combo” formed quickly upon Meltzer’s arrival in Los Angeles. They quickly started terrorizing audiences with their gratuitously stupid sounds and iniquitous stage exploits: their initial sets consisted of launching assorted cow parts from the stage in the direction of the helpless audience.
Vom also consisted of Gregg Turner on vocals, along with Meltzer, “Metal” Mike Saunders (under the stage name of "Ted Klusewski") on drums (both would go on to form the Angry Samoans, the next logical progression both musically and ideologically after a stint in Vom), Dave Guzman on “tuneless rhythm guitar”, Phil Koehn on lead guitar, and Lisa Brenneis on bass. They’d go on to issue the “Live At Surf City” EP on White Noise during the summer of ’78. This offering included such go-nowhere epics like “I’m In Love With Your Mom”, “Too Animalistic” (later retouched by the Samoans), “Punkmobile”, “God Save the Whales” and the record’s best track: “Electrocute Your Cock”.
The latter began with a Ramones-esque drum beat and showcased the lyrics: “Electrocute your cock, electrocute your cock / Looking for a hand job? Stick it in a clock”. This is unbelievably strange considering that Saunders was the first to coin the term “heavy metal” (in a review for Humble Pie’s “As Safe As Yesterday Is” in a 1970 issue of Rolling Stone) and has a graduate degree along with Meltzer being considered one the premier rock writers of our generation and the fact that he had a graduate degree from a stint at Yale.
Let me get to the point: here’s a wonderfully slapdash set from Vom recorded live on stage at the Mabuhay in San Francisco on April 24, 1978. I received this recording many years ago from an old school San Francisco punk tape trader who claimed it was a low generation copy straight from the soundboard master. This gem of an artifact includes tracks not recorded for the “Live At Surf City” EP.
Track list:
1) My Eyes Have Seen You
2) Louie Louie
3) No Surf Commies
4) Have My Baby
5) Broads Are Equal
6) Pogo Child
7) Punkmobile
8) Dare To Be Dumb
9) (I Am) The Son Of Sam
10) Gimme Nothin'
11) I'm In Love With Your Mom
DOWNLOAD:
http://www.mediafire.com/?bmzehq9hhbjltbi
Posted by Chris Prorock at 2:22 PM 2 comments