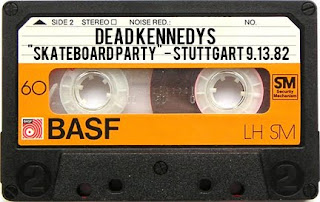 The brilliance of the Dead Kennedys has always been tied to their expertise at giving their creation three-dimensionality while retaining the vigor of hardcore punk. They combined truly crushing, high-speed guitars and drums with sardonic political and social commentary. Even when they reduced their sound to simplistic hyperactive stuff (“In God We Trust”) they still managed to sound fresh and thus shred most of the competition doing the same thing.
The perception of the DK’s since their ’86 breakdown has been anything but ridden with irony. As ardent symbols of anti-establishment ideologies during their time as a band, they’ve become increasingly more accepted within the mainstream since their passing. A great deal of this surely stems from the fact that the former members (excluding Biafra) have seen it fit to give the band a more commercial showcase.
In contrast to this, the appeal of the Dead Kennedys has worn off amongst underground DIY hardcore aficionado types. Ironically, the band that pioneered American hardcore with their inimitable style, commendable standards, and uncompromising resistance to the usual targets have been demoted to the ranks of introductory punk 101 fodder. There may not be much exclusivity in being a Dead Kennedys fan, but considering their output, it’s quite rewarding.
“A Skateboard Party” was the first Dead Kennedy’s live material that I had ever heard. Growing up in Western Connecticut, I was fortunate enough to live only a few minutes from one of the coolest records stores I’ve ever been to, Trash American Style. I remember recording this LP so I could listen to it on my cheapo Sony Walkman (does anyone even own a Walkman anymore?) at high school. I loved how the versions included on this illegitimately produced (more on that later) were much more rapid and convulsive than the studio versions. Listening to this again right now, it’s effortless to appreciate how much of a live powerhouse the Dead Kennedy’s were. Darren Peligro’s apeshit drumming on this LP is altogether riotous and it rarely lets up. Hands down, he’s one of the greatest drummers to have at it.
The story behind “A Skateboard Party” is that Jello Biafra said the guy behind Starving Missile Records in Germany could press a limited quantity (1000) of the soundboard recording he got from the gig the band played on 9.13.82 in Stuttgart. This release was done in cooperation with Alternative Tenticles and the band was subsequently paid. The original pressing had a black and white live shot of Biafra on the cover. This record was quickly repressed incessantly (at least 10,000 copies are out there) without permission by Mülleimer Records in a blue sleeve. This unscrupulous act led the DK’s to never consider anything like this again.
This recording is one of the best unofficial Dead Kennedys documents out there. The soundboard recording is nearly unblemished, perhaps lacking a slight bit of treble in the mix. This is worth downloading simply because Biafra tells a female in the crowd he’ll sign her an autograph with his dental chart and that they briefly attempt an improvised Heino cover.
Some sources claim that this is bootleg LP consists of two shows: Stuttgart 9.13.82 & Munich 9.15.82. If anyone has clarification on this, please drop me a line at the email listed on this archive. 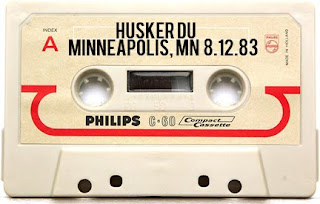 This performance was recorded shortly before the ambitious double-full length “Zen Arcade” was released in 1984 on SST. Having already released "Everything Falls Apart" on their own label Reflex and "Metal Circus" on SST, the Huskers were making titanic leaps forward. If "Metal Circus" was a collection of anthems both slow and fast, "Zen Arcade" was the "Tommy" of underground music. As a themed record about a kid leaving home for the first time to run away to the big city where he finds strange (and often disturbing) adventures, it covers more ground than a Greyhound bus over it's four sides of wax. The songs alternate from raucous angry assaults (nearly all of side 2) to psychedelia to unrepentant pop songs to straight up rock classics. Of course there's some some self-indulgent filler (thirteen and a half minutes of "Reoccurring Dreams") on the record, but nearly every classic needs such a throwaway for good measure.