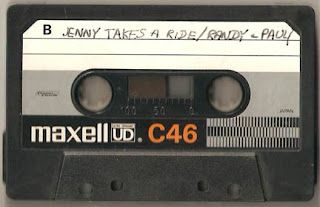 This is the second Black Randy telephone call featured on MORE THAN A WITNESS and is a total riot.

Before Black Randy and the Metrosquad performed in San Francisco for their first ever gig there, they contacted Paul Rat (aka Paul Bachavich) who promoted punk shows in the city at Temple Beautiful. Knowing the importance of aligning himself with other bands that would further his own infamy, Randy demands that the Metrosqaud share the bill with the Mentors and Wall Of Voodoo. He claims that this package bill is akin to going to a porno store and purchasing a three pack of magazines: “one is little girls on the front, the one in the back is dogs, but the one you can get in the middle, you’re never sure. It could be people crapping on each other or it could be a nudist book.” This is one phenomenal metaphor for booking a punk rock show.

It gets better. The cringe that Randy lets out after hearing that Paul Rat wants to book Tuxedomoon on the show is hilarious. Randy goes on to refer to the Go-Go’s as “halloween punk shit” and compares sharing the bill with them to the “brothers in the jungle wearing alligator shoes.” Joe Nanini from Wall Of Voodoo can be heard in the background and is clearly encouraging Randy’s behavior. The comedic value of this phone call is off the charts and should be downloaded immediately.

This tape belongs to Dangerhouse founder/Black Randy and the Metrosqaud member David Brown. Special thanks to Ryan Richrardson of Break My Face for this recording.