THE CRUCIFUCKS: "I AM THE ESTABLISHMENT" 1982 DEMO. 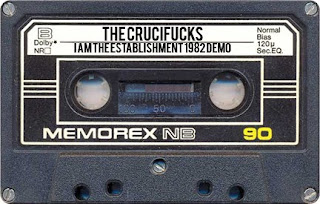 My first taste of the Crucifucks came when I received a dubbed copy of their debut album on Alternative Tentacles from my friend's older brother. I had previously seen the band's name in mailorder catalogs prematurely considered the band a favorite based on their monicker. The quality of this cassette suffered from multi-generational hiss (due to the fact that it had been dubbed and redubbed for fledging punkers such as myself) and had many near death experiences in my tape deck from being eaten.

Regardless of these significant sonic impairments, I could easily understand that Doc Corbin Dart was a brainchild. His vocals are simply unreasonable and defy any logical comparisons due to their shrill quality. I suppose one could say that Doc Corbin Dart sounded like Jello Biafra raised to the tenth power or even at times, Roger Rabbit. These days, Doc Corbin Dart has legally changed his name to "26" and has totally renounced this debut album and the concept of swearing.

Without further delay, here is the first Crucifucks demo tape. This was recorded in Lansing, Michigan in 1982. This demo was recorded approximately a year and a half before the debut album was released. "Leave Me Alone" was not recorded for the first album and is only featured on this demo tape.

Track list:
1. Democracy Spawns Bad Taste
2. Go Bankrupt and Die
3. Legal Genocide
4. You Give Me the Creeps
5. Marching For Trash
6. Cops For Fertilizer
7. I Am the Establishment
8. Leave Me Alone
9. No One Can Make Me Play Along With All Of This
10. Hinckley Had a Vision 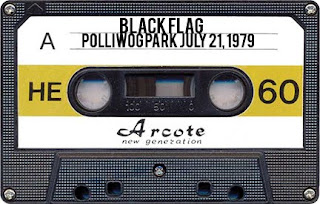 After playing a handful of local gigs and making a small name for themselves during the first part of 1979, Black Flag was somehow booked to perform in front of little over 1000 people on a Sunday afternoon in Manhattan Beach's Polliwog Park on July 22, 1979. Clearly the event organizer had no knowledge of what Black Flag represented. The Tourists and Big Wow were two new wave groups that opened the show and I have read in some sources that Black Flag was a last minute replacement. Either that or Greg Ginn did his typical finagling when it came to speaking to a promoter; Ginn's angle to bypass a booking refusal was to tell a promoter that Black Flag were "a rock group with jazz influences".
The crowd of Southern Californian families had no idea what was about to hit them that afternoon. Expecting a relaxing Sunday afternoon in the park while casually listening to a tame, bearded Eagles type rock group, onlookers were treated to the unadulterated vitriol of a young Black Flag. One fan reflected on seeing Black Flag that day: "They played for my winning Little League team that day. They were a last minute replacement band. We threw chicken bones and watermelon at them". 100 or so ardent Black Flag fans turned out for the performance and acted totally unruly. A local newspaper described that crowd as "jumping up and down in the traditional punk pogo and pelted the band and nearby crowd with oranges, tomatoes, watermelons, cans, rocks, and bottles".
The audience source of this recording is indeed primitive sounding for the casual listener of Black Flag. Regardless of the quality, this is truly a significant and historic performance. It's incredible to think that this performance even lasted 24 minutes (6 minutes of it being an actual riot) and that the plug wasn't pulled on the band during one of the first few songs. Unfortunately there is considerable clipping during "Machine" and a drop out during "I've Had It". Regardless, this is an enjoyable listen and truly a lasting punk rock document from an era when bands were truly confrontational.
If anyone has a different source of this performance, I would love a copy.
Track list:
1. Don't Care
2. White Minority
3. I've Heard It Before
4. Machine
5. I've Had It (cut)
6. Nervous Breakdown
7. Spray Paint
8. Jealous Again
9. Police Story
10. Promoter speaking to the crowd/rioting
11. Revenge
12. Fix Me
13. Depression
14. Louie Louie
DOWNLOAD:
http://www.mediafire.com/?mj5dz0hldlc
Posted by Chris Prorock at 9:04 AM 5 comments