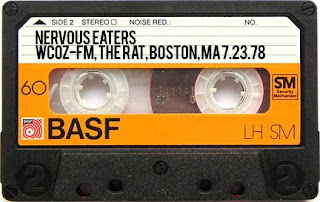 It’s no accident that the Nervous Eaters formed in 1974 from the ashes of an unsuccessful band that they dubbed the Psycho Punks. This is most true when you consider their two exemplary punk singles that still sound quite powerful thirty years later. Instigated by local legend Willie Alexander (who played in the Velvet Underground for the blink-of-an-eye while they elicited a faint death rattle in late ’71), the Nervous Eaters played their first ever gig at the Rat in during 1976. They promptly became a much-appreciated local act due to their high-energy live shows which displayed their infectious enthusiasm. The Rat appreciated the Eaters enough that owner Jim Harold offered the band an opportunity to release a record. “Loretta” came out on his own Rat label and was quickly followed by “Just Head” shortly after. The former was a promising debut that has aged quite well. The latter is simply one of those all-time punk shredders. Both “Just Head” and it’s flip “Get Stuffed” embrace the crudity that the Real Kids were too self-conscious to put forth, thus making it (amongst several other reasons) the best Boston punk 45 released to date. When Steve Cataldo was asked about the period in which the “Just Head” 45 was written and recorded he claimed, “We were stoned all the time. Jesus, we smoked a lot of dope then, come to think of it…. I’m lucky I have any lungs left”.
The self-titled full-length album that arrived in 1980 on Elektra is an effort that is often rebuffed by fans that favor the earlier material of the Nervous Eaters. Undoubtedly the material that predated the LP is vastly superior (well, of course it is considering it’s also better than 90% of the greater body of punk rock ever released worldwide… just sayin’) when you compare both parts of their catalog. If one can possibly eliminate the memories of the Eaters two perfect singles and can listen to this LP with an open mind, it’s not as ghastly as everyone claims it is. Sure there's some really embarrassing moments where the vocals enter a no forgiveness zone due to shamelessly executed falsetto, a handful of the tracks are fairly listenable if one considers this to be a soft power pop affair from the start. Undoubtedly the band was relatively perplexed toward their full-length considering they had a brass ring hanging in front of them for the grabbing; Fred Lewis managed both the Eaters and the Cars (thus helping them achieve superstardom) while Nicky Hopkins, Harry Maslin, and Steve Cropper contributed to the full-length effort. These figures were amongst those who dug serious rock and roll gold of yore while their buddies (the Cars) were polishing up their new Corvettes. To say that they were under some strain would be putting it rather lightly.
This superb FM soundboard recording (meaning the master source was derived from a recording of the original FM broadcast) is a fine illustration of how dangerous the Eaters were at their crest before their so-called new wave contamination. The introduction and the consequent upsurge into “Get Stuffed” has yet to be unsuccessful in giving me goose bumps after countless listening experiences and the set sustains this level of eminence until it burns itself out. This set is also a decent example of the band performing the LP tracks without the sterile production and flaccid performances. Some of these tracks almost have an early Jim Carroll feel to them (yes, this is a complement), especially when you listen to “Have It With Your Coffee”. Overall, this is a great recording and truly captures the sarcastic punk essence of this classic band.
Track listing:
1. Introduction/ Get Stuffed
2. Last Chance
3. After Your Goodtime's Gone
4. Have It With Your Coffee
5. By Yourself
6. She's Going To Be My Baby
7. On The Avenue
8. Just Head
9. Fantasy Girl
10. Hot Steel And Acid
DOWNLOAD:
http://www.megaupload.com/?d=UYMQKY3P
Posted by Chris Prorock at 10:41 AM 1 comments