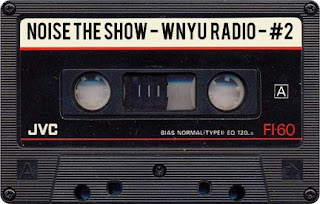 Today’s post consists of the second installment of “Noise the Show” from my tape collection. As previously noted, when I received the original stash of these old episodes they featured no information regarding broadcast dates. Your guess is as good as mine regarding the exact dates. Regardless, based on the overt chronology of when these records were released, one can deduce that this specific broadcast didn’t happen before late ’82 or perhaps very early ’83. Because of the lack of any date information, I will refer to this cassette as tape two because it’s the second one that I received. 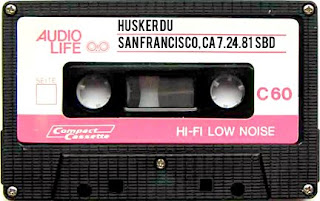 Husker Du’s infancy period consisted of one year of taking inexpensive amphetamines and racing through songs without any regard for melody. Of course, this attention to melody would later define the majority of their recorded output. Claiming that the Huskers weren’t concerned with melody may come across as pejorative and uncomplimentary, but during the year of 1981 Husker Du was a full-scale sonic blitzkrieg. Ostensibly speaking, their debut album “Land Speed Record” does not stand a chance when compared to their later catalog. The first few years of the band’s existence is still a period worth considering. This San Francisco show from July of 1981 chronicles this period arguably better than the live album that was officially released on Mike Watt’s New Alliance label.

This tape is a strong and clear soundboard recording that features a mix that boasts considerable integrity. Husker Du largely grew up in public and this document exhibits a band embracing a naturally sloppy approach. The sense of energy the Huskers had in 1981 was charming even if it’s crude and undeveloped. It can be argued that Husker Du was caught up in the hardcore zeitgeist of the early 1980s, but they seemed to transcend that definition with a different sense of urgency and fervor. This show defends this claim, strongly.

(There is some speculation about the date of this show amongst Husker Du aficionados. This show either occurred on July 24th or 25th, 1981. I listed the show as on the 24th because that's what my tape originally had written on it when I received it years ago.) 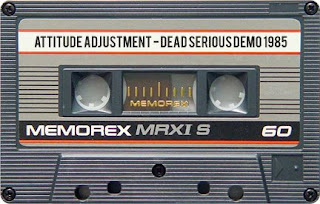 Attitude Adjustment were an underrated thrash band from San Francisco that formed in 1985. They are perhaps most well known in hardcore punk circles for releasing a record on Pushead’s classic label, Pusmort. This album, “American Paranoia”, presented a sound that was equal parts hardcore and metal, thus earning the distinction of being a true “crossover” document. A major lineup change resulted in definitively thrash metal sound after the initial album.

This was the only demo that was ever released by Attitude Adjustment. These songs exhibit a more hardcore influenced approach than their debut album on Pusmost that was released two years after this demo. These songs are brief and blistering. These songs seem to have a faultless contrast between hardcore and metal. It is my opinion that this is the best material the band ever released. 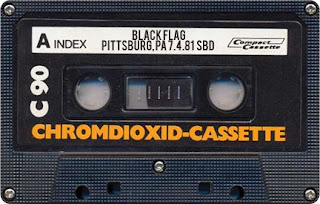 For all intents and purposes, Black Flag was the first American hardcore group to exist. Emerging from a Southern Californian beach community, they gained international notoriety through incessant touring and undoubtedly shaped local scenes wherever they played. The emergence of their own record label definitively influenced the means by which independent artists could release their own material and thus the greater scope of American punk rock. Perhaps stating this is palpable and overt at this point. Regardless, the influence of Black Flag should never be understated.

This recording consists of a good soundboard recording featuring Dez Cadena on vocals. Perhaps Dez had the least prowess as a front man considering the efforts of Keith Morris and Henry Rollins, but nonetheless Dez shines on this tape. This one starts with a sarcastic thank you to the Pittsburg police department and promptly erupts into a vehemence of magnificence. The Flag tears through 28 songs with fierce tenacity. The recording is an excellent soundboard with some nice rough characteristics. There is a slight cut during “Revenge.” I believe this is on the original master because I’ve yet to hear a version that is complete.

This is the first of many Black Flag tapes that will be featured on this site.

Posted by Chris Prorock at 9:37 AM 7 comments 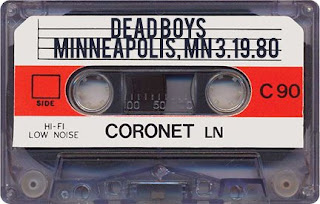 We are still talking about the Dead Boys in 2009 for legitimate reasons. As transplants, in New York they outpunked everyone on the Bowery circuit with all the obligatory violence, nihilism, masochism, and vulgarity found in the UK at the time, but to more of an extreme.

This show captures these cretins just after they returned from Florida after losing their minds recording their follow up effort with Felix Pappalardi. The whole scheme seemed weird from the launch, as Pappalardi was an esteemed figure in the dinosaur rock movement they were trying to dismantle: he had previously been in Mountain and produced Cream. The result was an album that had slightly less superior songs due to the typical second album drought and weak production. The record’s best track is probably “Ain’t It Fun” because Peter Laughner was partially responsible for it.

The sound and performance on this cassette is excellent throughout. It features a strong soundboard recording boasting a mix that is clean enough to satisfy auralists and aggressive enough to still deliver some vitriol. “Caught With the Meat In Your Mouth” is sardonically dedicated to Mama Cass Elliot and “Tell Me” is introduced as being “written by a bunch of junkies”. It’s this type of attitude that makes this show great and the Dead Boys outstanding when considering the overall canon of punk bands emerging from the late 1970s scene. Download this one and you won’t be sorry. 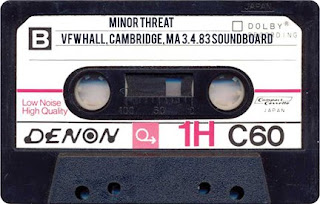 There is truly little left to say about Minor Threat that hasn't already been expounded on incessantly. They achieved something truly extraordinary when considering the near cavernous catalog hardcore punk acts of the 1980s: they managed to define a genre of music while never surrendering to it’s many shortcomings.

According to a flyer for this specific show, Minor Threat shared the bill with SS Decontrol, the FUs, the Necros, and the Meatmen. This being said, it seems they had no choice but to rise to the occasion and deliver a tremendous performance. The quality consists of a mono soundboard recording that generally features a decent mix. Hearing Springa’s backup vocals from the crowd during “In My Eyes” are fodder for goose bumps. Someone loses a tooth and Ian tries to return it to it’s rightful owner. Enough said. Just download it, already!

“No Reason” is incomplete on this recording. This show was released on the “12XU” bootleg LP that surfaced in 1991. 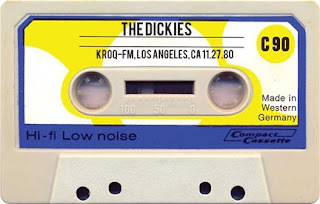 The Dickies hailed from the San Fernando Valley and served as the most superior example of hyperactive 1970s Southern Californian punk rock. Raised on Mad Magazine, they never took themselves serious enough to avoid a sense of self-parody. They were often referred to as the “West Coast Ramones” for obvious reasons. These loveable punks were enjoyably unserious and were quite self-aware of their own idiocy, unlike their New York counterparts who always seemed to be playing that same role much straighter. The first three years of the Dickies meant manically catchy pop-punks gems, one after another.

This cassette features a Thanksgiving Day interview with vocalist Leonard Graves and guitarist Stan Lee conducted by KROQ disc jockey Darrell Wayne. Wayne comes off as a bit square but Graves and Lee oblige his questions with humor and wit. Songs from the first two classic Dickies are showcased too. This cassette includes the entire broadcast (including all the original commercials featuring a cool Blondie "Autoamerican" ad) in superb quality. Overall, an interesting and enjoyable document.

This recording was obtained from the excellent "From the Garage" blog. This blog has numerous KROQ-FM radio shows from the mid to late 1970s. This blog can be visited at:http://fromthegarage.blogspot.com/