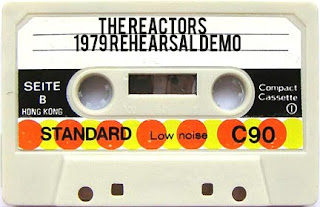 The Reactors are well known in the Killed By Death collecting circles for their painfully rare 45 "I Want Sex". Many of us first became aware of this track after it appeared on "Killed By Death #14". Since nearly any of us can afford one of these illusive wax platters, we are lucky that the Italian label Rave-Up released a great retrospective of nearly everything that the band recorded. I say "nearly" because this collection leaves off three classic rehearsal demos recorded by the band. After that project was compiled, Shep Ginzburg (singer/guitarist) unearthed one more long forgotten tape.
Here are Shep's memories of the session:
"It was recorded in our rehearsal space on 46th and 8th Ave (among the hookers and dope dealers). We miked up everything and ran the wires out into the hallway. I had my friend Tom Lowden mix the band through a pair of headphones, and we recorded it to reel to reel mono, because our console was monophonic. Tom had a very tough time because we played so loud that he couldn't tell what was coming from the headphones and what was just in the hall bleeding from the room".

These tracks were recorded in 1979 after the Reactors made their move from Bridgeport, CT to New York. Sheperd Ginzburg plays guitar and sings, Bob Payes plays bass and Cathy Burke provides drums.
These versions have never been released or have been circulated in any fashion before now.
Tracklist:
1. I'm A Reactor
2. Dock Of The Bay (Redding)
3. University Eternity
DOWNLOAD:
http://www.mediafire.com/?zgmmm24jfy1
Posted by Joe Snow at 5:39 PM 3 comments 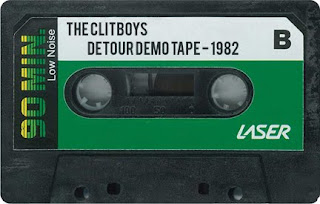 The Clitboys hailed from Milwaukee and are perhaps best known for being name checked as one of Bambi's favorite bands in the Meatmen track "Punker-ama" on their "War of the Superbikes" album. The hilarious song implies that the Clitboys (along with MDC and Crucifix) were a stiff hardcore group that sung about stale political issues of the day. Perhaps they weren't Chomskyan in their ideological approach, but they tackled some issues that were unique ("Gays OK", "Slogan Boy") considering the punk-jock climate of 1983. Regardless, I always have enjoyed their "We Don't Play the Game" 7" EP on Feedback Records. This was released in 1983 and although many dismiss it as generic stop-and-go Midwest hardcore, it's actually an enjoyable listen.
This 1982 demo is quite similar to their 7" EP. As a matter of fact, the recordings of "Have Faith", "So Funny" and "We Don't Play the Game" were later featured on their debut record. The tracks on this demo are reminiscent of the first JFA 7" but with less prominent vocals. I'm waiting for someone to cut a bootleg LP of several classic Midwest hardcore demos on one LP. This demo would be an excellent fit on such an item.
These 8 tracks on this demo were also available on the "First Strike" compilation cassette released by BCT in 1983.
Tracklist:
1. Time for Another War
2. Have Faith
3. I Hate the KKK
4. Apathy Rules
5. So Funny
6. Rat Race
7. Gotta Go to War
8. We Don't Play the Game
DOWNLOAD:
http://www.mediafire.com/?z24wvzjwzar
Posted by Chris Prorock at 12:29 PM 0 comments 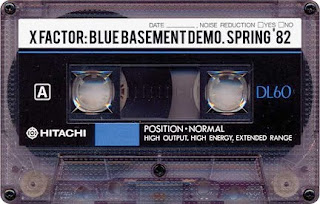 X-Factor were arguably one of the earliest Connecticut bands that had an identifiable proto- hardcore sound. Prior to 1982, there had been a thriving punk scene in New Haven and the surrounding area but these bands had a straightforward punk sound or leaned toward playing power-pop or new wave. It wasn't until 1982 that a faster and more aggressive sound emerged from Connecticut, which originated from the city of Bridgeport.
Most readers of this blog are probably quite familiar with CIA and Lost Generation (who also called Bridgeport home). These groups formed around the same time these demos were recorded and went on to release classic records. X-Factor however would fade into obscurity due to some member changes only to be reborn as Reflex From Pain with the addition of a new singer and guitarist. The core of X-Factor first played together in a band called the Xtras. Are you starting to detect a pattern in the names here? Yeah, I refer to them as the lineage of "X" bands. Bill Knapp is the common denominator in all these X bands. He played drums in these bands and several other bands that came afterward.

The line up for this demo consists of Bill Knapp on drums, Steve Schneider playing guitar, Dave Ware on bass and John "Ziggy" Viens providing vocals.

Bill and Steve had played in the The Xtras and 532X prior to X-Factor. Dave Ware played in Reflex From Pain and 76% Uncertain (again with Bill Knapp on drums) after the demise of X-Factor. Ziggy sang for ADX after leaving X-Factor.

Blue Basement Studios was a pseudonym for Bill Knapp's parents basement named after the shade of paint on the walls. Many of the early Connecticut hardcore bands recorded here. The Vatican Commandos, CIA, and the Violent Children all cut material there. This batch of X-Factor songs were recorded in the spring of '82 and is their second demo. The songs "Media Control" and "American Express" were later re-recorded by Reflex From Pain.
I will post several more great unreleased Connecticut hardcore artifacts in the near future.

DOWNLOAD:
http://www.mediafire.com/?lzuzhvuzyun
Posted by Joe Snow at 12:07 AM 8 comments 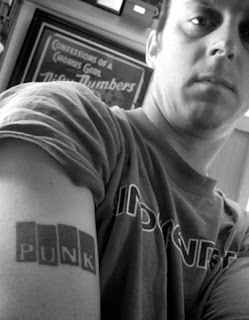 Referring to Joe Snow as a Connecticut hardcore fixture would probably be putting it pretty lightly. Growing up in Connecticut and attending hardcore shows by the mid 80s, Joe was a mainstay at the Anthrax club photographing all of the classic bands of the era. Many of his photographs can be seen garnishing countless late 80s hardcore records. Once I even heard a story that his wife Sue used to drive Crippled Youth to shows they were playing when they were too young to drive.

Joe has a vast knowledge of hardcore coupled with an impressive collection of unreleased material that has never seen the light of day. Much of this material will be showcased on this site. I am very excited to have Joe as a contributor here at More Than a Witness and am looking forward to what he is going to share on this site.