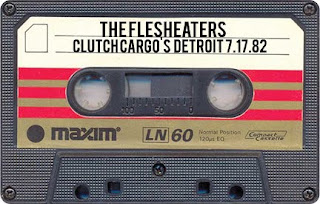 The original crop of juvenile poets calling themselves “punks” in New York were drawn to the style for it’s straightforwardness and it’s malleable confines. Unsophisticated rock music served as the perfect milieu for their verbal torrents. This is unquestionably true for a variety of first wave west coast punk bands but is especially true for the Flesheaters from Los Angeles. Less celebrated to almost a tragic degree when compared to his New York punk contemporaries, Chris Desjardins was ambitious enough to lyrically encompass such topics as murder, vampirism, and having sex with the dead over some of the most demented music backdrops of the era. “A Minute To Pray, a Second to Die” still ranks as one of my favorite records from this period. I suppose that’s not hard to accomplish when you include tracks such as “Digging My Grave”, “See You in the Boneyard”, and “Diving Horseman”. It also doesn’t hurt when you have John Doe and DJ Bonebreak in your backing band either.
This performance is complemented greatly by the fact that this recording is nearly faultless when considering most unreleased live recordings from this era. Much of this may have to do with the gig happening at Clutch Cargo’s as many decent to excellent soundboard tapes have circulated from this venue. This performance recorded for their tour to promote the recently released “Forever Came Today”. The band unselfconsciously tears through 11 tracks with a snarling viciousness. Desjardin’s voice is so sharp that is cuts through the chaos behind it. If you enjoy this recording half as much as I have, you’re certainly in for a treat.
For some reason the song titles to tracks 6 and 10 are escaping me. If you can identify these tracks please post in the comments or drop me a quick email at the address posted on this archive.
Track listing:
1. Home Of The Brave
2. Pretty Sweat
3. Hand Of Glory
4. A Minute To Pray A Second To Die
5. Pony Dress
6. ???
7. Eyes Without A Face
8. Every Time I Call Your Name
9. River Of Fever
10. ???
11. The Wedding
DOWNLOAD:
http://www.mediafire.com/?3mik2g9pjb2s1xt
Posted by Chris Prorock at 7:43 AM 5 comments 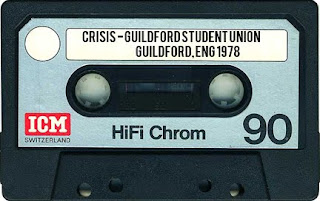 Crisis is perhaps most well known for what they accomplished after the band had concluded. Douglas Pierce and Tony Wakeford went on to form Death in June (The DIJ track "All Alone In Her Nirvana" began life as a Crisis tune), known for their highly influential and genre-defining apocalyptic brand of gothic folk. Wakeford would form the significant neofolk group Sol Invictus after he split from Death in June. Luke Rendall went on to play drums in the Mick Jones produced post punk group Theatre of Hate shortly after Crisis broke up.
Despite the influential stature of Death in June (and to a lesser extent Theatre of Hate), the output of Crisis should not be underestimated. They released several phenomenal singles ("No Town Hall", “UK 79”, and "Alienation") and a 12” EP entitled “Hymns of Faith” which utilized both buzzsaw picking and singular note guitar lines and featured lyrics about television, violence, and totalitarian Russia. The total output of the group highlights an insistent yet inimitable interpretation of what punk meant to them during the turn of the decade. The tracks featured a remarkable rhythmic emphasis with political lyrics that were profound yet nearly ever trite. Crisis was defined by a platform that was fervidly anti-fascist and consistently performed at Rock Against Racism, Anti-Nazi League, and Right To Work political rallies. This showing inspired UK music magazine Sounds to refer to the output of Crisis as “music to march to”. Paradoxically, the later output of Pierce and Wakeford while performing in Death in June would rely heavily on Nazi imagery.
This recording is audience sourced and suffers from some slight generational loss. I can determine this recording is low generation but it is by no means a flawless audience recording. What is essential to consider is the scarcity of a recording such as this and the presence of "SPG", an unreleased Crisis track. This live snapshot of Crisis is quite enjoyable to listen considering the paucity of other live recordings by them in circulation.
If anyone has more specific information regarding the date of this show, please contact me via the email address listed on this archive.
On a related note, "Hymns of Faith" has just been officially reissued on vinyl by English label La Vida es un Mus. To order this release or for more information, check this link: http://www.lavidaesunmus.com/
Track listing:
1. Holocaust
2. Afraid
3. Laughing
4. On TV
5. White Youth
6. Red Brigade
7. All Alone In Her Nirvana
8. Alienation
9. SPG
10. UK '78
DOWNLOAD:
http://www.mediafire.com/?4nnh3w8eum48p9u
Posted by Chris Prorock at 7:10 PM 0 comments 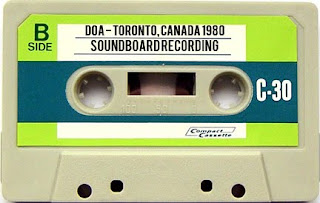 Perhaps the greatest characteristic of DOA’s long career is that they’ve by no means discarded their virtuous yet pleasure-seeking temperament. These Terminal City punks were never resistant to confusing sincere rebellion with vulgarity (just check out the “Let’s Fuck” rewrite of the classic Chris Montez hit song) and never meandered with the trend of playing overt heavy metal throughout the 1980s. Their early catalog (“Triumph of the Ignoroids”, “Something Better Change”, “Hardcore 81”, & “War on 45”) is a sonic cascade of tightly wound and highly charged proto-hardcore. DOA is unanimously considered to one of the founding fathers of hardcore punk (beside Black Flag, Middle Class, Bad Brains, & Teen Idles) as the band’s second full-length album (“Hardcore 81”) is arguably the first ever document to declare the genre’s name.
Recorded right smack in the middle of this period and prior to all of the line up shifts, here’s a fantastic soundboard tape that was captured while DOA journeyed east to perform in Toronto sometime during 1980. This set was recorded with the band’s classic two-guitar lineup of Shithead, Rampage, Biscuits, and Gregg that was featured on “Hardcore 81”, which was recorded presumably right around when this gig was played. The recording quality is soundboard sourced but suffers faintly from some negligible compression issues and the fact that the guitar is a little low in the overall mix. The band plays a fervent set with tons of crowd baiting and rowdiness between songs. This is an essential unreleased recording from an extraordinary band captured at their prime. Enough said.
It’s unlikely that this is the complete recording of this set. If anyone has an upgrade or any additional information regarding the date of this recording, please get in touch with me via the email listed on this archive.
Track listing:
Take a Chance
Pinhead Theme
Royal Police
Woke Up Screaming
The Enemy
What’cha Doin
Let’s Spend the Night Together
I Don’t Give a Shit
DOWNLOAD:
http://www.mediafire.com/?4xucxrwxldgmr5o
Posted by Chris Prorock at 6:03 PM 5 comments