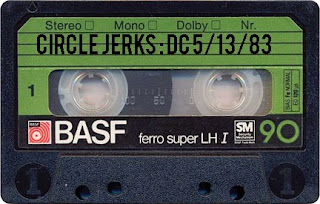 Adjacent to two other majestic seaside cities, Hermosa Beach provides the world with numerous pearls of culture: surfing, beach volleyball, sunbathing, and the birth (arguably) of hyperkinetic genre known as hardcore punk. Clearly it must have been the South Bay’s gentle westerly sea breezes that influenced the formation of both Black Flag and the Circle Jerks.

Considering the delightful surroundings, gorgeous people, and general Pollyanna-glaze good vibrations of the beach, it makes sense that the blueprints of hardcore punk were first sketched here. Defining itself in opposition against all creatures with perfect white teeth and Lacoste polo shirts, these embryonic agitators had a great deal to unite against. The dichotomy of this stark schism gave the world the “Nervous Breakdown” 45 and the “Group Sex” 12” amongst countless other classic records that generally haven’t matched up to these two epitomes of the emerging style of hardcore punk when considering both quality and legacy.

As captured on celluloid in “The Decline of Western Civilization” and in countless photographs, singer Keith Morris can regularly be seen clutching a lone Budweiser while he stalked the lip the stage. I always thought this was such a cool gimmick that he implemented; Keith sold the synchronized image of a rabble rouser dodging a continual barrage of anarchic bodies in search of teenage release and a lonely barfly nervously clasping the only inebriant that he can afford at the end of a local dive bar.

This show (recorded during the spring of ’83 at the Space II Arcade in DC where a slew of hardcore gigs took place) is a solid document of how the Circle Jerks had grown from an act toying initially with the draft of a nascent genre of music to a full-time touring powerhouse and inspiration to many new homegrown hardcore punk acts. This set is from a soundboard source and shows a slight generational loss when played back but largely the quality is excellent. The furious pace of this set is heightened by the fact that the master tape was edited so that between song space is removed. Normally I hate it when it tapers take such liberties but this edit job really adds to the absolutely unyielding rapidity of the set. Chuck Biscuits also demonstrates an impressive one-man drum clinic behind his maple colored Ludwig that he was presumably demolishing at the time with each stroke of his trademark percussive supremacy. His workout on "When The Shit Hits the Fan" is considerably awe-inspring.