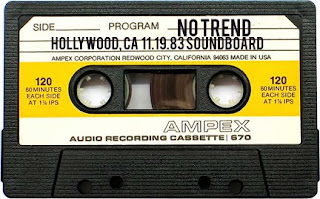 No Trend are easily one of my favorite bands of the hardcore era. They were rejects in a scene comprised of so-called misfits. Defining themselves in opposition to the narrow hardcore acts of their day, No Trend seemed to despise everything in their path. For example, they didn’t make many friends when they were crammed flyers that read: “No Trend, No Scene, No Movement” into all the Coke machines that the Georgetown/Washington DC straight edge types bought soda from. Ultimately, the goal of No Trend was to turn the hardcore scene inside out in an effort to expunge the narrow-minded types from ever turning up. This dialectical approach served to alienate the insular factions within the scene while finding smarter people who were still into the dictates of aggressive music.

Their approach to music was more akin to Flipper or the Butthole Surfers. The first demo, the “Teen Love” 7”, and the “Too Many Humans” 12” are all superb examples of abrasive and sardonic deviations from the dim-witted hardcore norm. These records probably confused a great deal of people at the time, but those who liked it understood what it was all about.

Taking the road in a damaged ’76 Ford ambulance, they played all of the major venues on the hardcore map in 1983.This live recording is a great soundboard of a show played in Hollywood on November 11, 1983. This soundboard recording is crisp and clear. From what I recall, this recording is better than the live tracks on the official No Trend CD. Unfortunately this set is not complete as there are only 4 songs included here. It’s highly probable that a complete recording of this show exists. If you have a complete recording of this show, please get in touch.