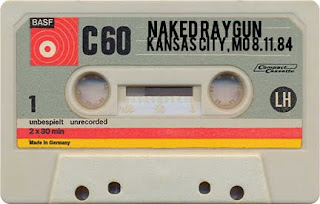 Shortly after Midwest thrash had assigned itself to it's own secluded ghetto, where it would knowingly decide not to challenge the musical aesthetics of other genres, a new type of punk ascended from it's rigid cadaver. Naked Raygun (along with other Midwest imaginative heavyweights like Husker Du, the Replacements, Big Black, and Killdozer) were one of the most promising and fresh groups to emerge from the monotony. Naked Raygun’s magical powers were that they expanded the parameters of what many thought hardcore punk was. Moreover, they abandoned the ensnarements of tuneless thrash while producing punk rock that was strong enough to maybe even be taken into consider by the mainstream music critics. Even if this was never actually achieved, they helped push punk forward by giving adventurous people without mohawks something to take pleasure in.
This recording represents an enjoyable audience recording captured during the summer of '84. This performance is heavy with tracks from "Basement Screams" which were dropped a short time later. When comparing this set list with Naked Raygun live tapes I have from only a year or so later, virtually all of these tracks faded out of their live set.
This performance was originally taped by the gentleman who runs the excellent Oxide Flake website. He does something quite similar to this site in documenting many shows that he originally taped in Kansas and Missouri. This site can be viewed here: http://mrfink.com/oxideflake/
Track list:
1. Knock Me Down
2. I Don’t Know
3. Home Of The Brave
4. Mofo
5 .Stupid
6. No Sex
7. Surf Combat
8. Metastasis
9. Gear
10. The Strip
11. Bomb Shelter
12. Tojo
13. Swingo
14. Only In America
15. Managua
16. Rat Patrol
17. Potential Rapist
18. Dog At Large
19. New Dreams (cut)
DOWNLOAD:
http://www.mediafire.com/?znz4khjyvkm
Posted by Chris Prorock at 4:42 PM 0 comments 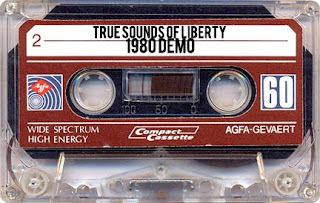 TSOL exploded out of Long Beach, California in 1978 to develop into one of Southern California’s leading hardcore outfits. Forming from the remains of Johnny Coathanger and the Abortions and Vicious Circle, the original lineup of TSOL were purveyors of political proto-hardcore that bristled with exhilaration. It’s extraordinary to consider how many name changes that Jack Grisham has had in his musical career; Jack Greggors, Alex Morgan, Jack Ladoga, Jim Woo and James DeLauge have all graced the sleeves of TSOL releases. With no less than 5 different stage names, you begin to wonder if he’s a fugitive evading the lawman.
These four demo tracks are outstanding. The sound quality is outstanding. These tracks are in the vein of the first 12” on Posh Boy; the tracks being simultaneously forceful and melodious with a genuine political edge. This demo recording was previously bootlegged onto vinyl in 1994 as the “1980 Demo” 7”. Supposedly 500 copies were pressed but one can never be sure of such information.
Track list:
1. 80 Times
2. Superficial Love
3. You Don't Have To Die
4. Silent Majority
DOWNLOAD:
http://www.mediafire.com/?zcyydyyyjnm
Posted by Chris Prorock at 9:12 AM 5 comments 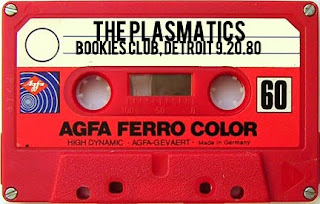 To an outsider, the Plasmatics could in all probability be best elucidated as Kiss but with tits. For a brief period, their outlandish behavior earned them some minor mainstream media coverage. To someone more familiar with the group, they represented a magnificent cacophony. Perhaps the greatest thing about the original incarnation of the Plasmatics was the fact that they were masters of artless and uncontrived gimmickry. The band’s image was conceived by ex-porn entrepreneur Rod Swenson and visualized by a squad of total rock n’ roll reprobates. The band is perhaps best defined by their mouthpiece, Wendy O. Williams, who gruffly talks, bellows, barks, and heavy-breathes through some of the finest proto-hardcore our great land has ever heard. Swenson composed all the lyrics of the Plasmatics. This gutter prose involved psychotronic aesthetics consisting of copulation, aggression, and various other superfluous grotesqueries.

Their debut album, “New Hope for the Wretched” is a band captured at their no frills best. There is nothing delicate about this record, which is strangely produced by Jimmy Miller. He is best known for producing the archetypal late 60’s output for the Rolling Stones. Despite the unconcealed spectacle (they were sawing guitars in half and destroying automobiles on stage), there were some bona fide tunes on their first full-length. The tracks hammer on with proto-hardcore locomotion and have stood the test of time.

This audience tape was recorded at the legendary Bookie's Club 970 in Detroit. This was Detroit's first ever punk venue. Homegrown talent such as the Romantics, Sonic Rendezvous Band, Destroy All Monsters, and Wayne Kramer were constantly performing at Bookie's. Virtually every punk touring act from America and the UK would play at Bookie's, thus it made sense that the Plasmatics would rip through this set included here in the fall of '80. The recording quality is pretty good for an audience tape. Download this show and see for yourself!

16. Nothing (slight cut in middle)