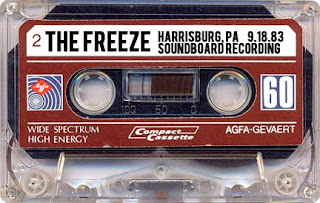 The Freeze were permanently misfits in their own time and place; they originated from the isolated location of Cape Cod, were not clandestine about their consumption of party favors contrasted with a fervid Boston straightedge scene, and never became an overt heavy metal failure. I suppose it’s these differences that allocated these guys the independence necessary to the defining their sound and image in their own terms. Cliff Hanger’s lyrics often packed a clever tongue-in-cheek sarcasm whilst more hard line Boston groups took themselves way too seriously and couldn’t write self-referential material to save themselves from the oncoming hard rock fatality. This so called crew (read: clique) considered the Freeze to be Cape Cod high school townies that weren’t hard because they didn’t live in the big city life. Although the Freeze’s lineup over the last 30 years hasn’t remained consistent (Hanger is the only current original member in the outfit), they have outlasted nearly every one of these naysayer groups, performing live with regularity, not simply for chic reminiscence-trip gigs like some of the other classic Boston hardcore groups.

This excellent soundboard recording was captured on September 18. 1983 when the Freeze played Harrisburg, PA, presumably right before their killer “Land of the Lost” debut album was released in ’84 on Modern Method. The performance here is solid; I think this gig is a really accurate sketch of what the Freeze were like live on stage during the early (and best) part of their career.