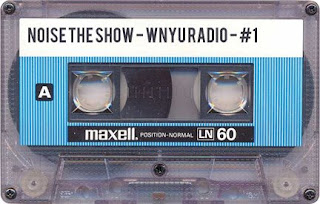 "Noise the Show" was a weekly hardcore punk radio show that was broadcasted on collage radio station WNYU and was hosted by Tim Sommer. The show was originally known as “Oi the Show” and aired on Tuesday nights before going to the “Noise” title and a Wednesday evening time slot at 7:30pm.

The importance of “Noise the Show” cannot be overstated. It was perhaps the second regional hardcore punk radio show to exist, considering that Maximum Rock n Roll Radio was up and running in 1979 on KPFA in Berkeley, CA. Also, many of the bands that were played by Sommer did not even have a record out when their sounds were broadcasted. For example, tracks from the Beastie Boys demo were played 6 months before their “Pollywog Stew” EP was released in July of 1982.

This episode starts off with some standard UK punk fodder (Anti Pasti, Blitzkreig, UK Subs) and improves with tracks by the Damned, Menace, and the Business. Hairs raise on the back of my neck when Sommer plays the then brand new Battalion of Saints track, “Don’t Believe” by Kraut (which wasn’t even out yet officially) and announces a gigs for Kraut, Heart Attack, the Betrayed, and the Stimulators.

Sadly, when I received these tapes, they did not include any information regarding when they were originally aired. Because I will be posting several more episodes of “Noise the Show” on this site, I will refer to them in the chronological order that I post them. Thus, this is known as tape one.

I should note that I am one gracious fellow for all of my friends who have posted about this blog to help get it some exposure. You're an equal part in helping this endeavor grow. Thank you.
Something that I am not too keen is the evidence of someone simply posting the download links to the tapes on the blog in a forum. Although I appreciate the good natured intentions of a fellow hardcore enthusiast, I feel this blog has other media on it worth checking out. Simply posting a Zshare download link on a message board really undermines my general efforts with this site.
If you would like to tell your friends about posts on this blog, that's great! Just remember to make sure you post links to the actual blog, not merely the download links.
Okay. That's all for now. More new tapes coming soon!
Posted by Chris Prorock at 1:56 PM 0 comments

Email ThisBlogThis!Share to TwitterShare to FacebookShare to Pinterest
Labels: ANNOUNCEMENT 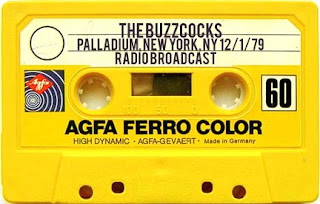 Back before the Internet superhighway existed for the purposes of acquiring far out punk rock contraband, there was a different route that had it's origins in Lower Manhattan. The New York Palladium existed on West 14th Street and served as the venue where many notable artists (The Clash, The Fall, The Undertones, Rockpile) would play their first shows in Gotham. More often that not, performances at the Palladium would be recorded and broadcasted for the public's aural consumption. These recordings also served as great and consistent fodder for the punk rock vinyl bootleggers looking to line their pockets with capital and to satisfy the public's desire for live material from their favorite bands.
This Buzzcocks Palladium gig is a great example of a classic band performing their best songs while in their absolute prime. The band is marred by a few technical setbacks, but overall this one is certainly having in your collection. It ranks as one of the best live Buzzcocks bootlegs in circulation. The recording was taped off the radio in early 1980 when this was originally broadcast. The mix is well balanced and overall this tape sounds excellent.
I also really wanted to post this tape because of simply how cool it looks.
DOWNLOAD:
http://rapidshare.com/files/196966882/Buzzcocks_NewYork_1979.rar
Posted by Chris Prorock at 11:22 PM 5 comments 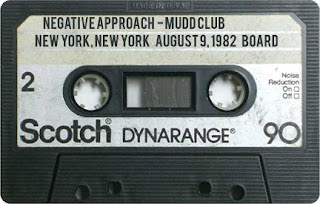 There is something that I will never comprehend about the Negative Approach "Total Recall" career spanning discography. Since Touch and Go released the anthology and clearly worked closely with the band members, it makes no sense to me why all of the live tracks featured toward the back of the disc sound like total garbage. Considering there have been at least 4-5 decent to excellent live soundboard recordings circulating in trading circles for decades, and the fact that the band was clearly privy to even better live recordings since they played in the band, there's no reason why the band's retrospective CD should feature such inferior selections.
This Mudd Club soundboard tape is pretty enjoyable. It's also a recording of note because it's a considerably less circulated item too. One small detraction is that the guitar isn't prominent enough in the soundboard mix during the first few songs. Regardless, after hearing John Brannon oscillate from sounding like a well adjusted young man to a caged tiger in less than five seconds: ("Hi, we're Negative Approach.... CAN'T TELL NO ONE"), little else matters anyway.
Much more great Negative Approach stuff will be archived on this site in the future. Please stay tuned.
Track listing:
1. Can't Tell No One
2. Friend Or Foe
3. Live Your Life
4. Pressure
5. Fair Warning
6. Sick of Talk
7. Whatever I Do
8. Chaos (4 Skins)
9. Said and Done
10. Ready to Fight
11. Lost Cause
12. Why Be Something That You're Not?
13. Genocide (partI)
14. Genocide (part II)
15. Nothing
16. Never Surrender (Blitz)
17. Negative Approach
DOWNLOAD:
http://www.mediafire.com/?mwm3jyhvoj2
Posted by Chris Prorock at 6:56 PM 8 comments 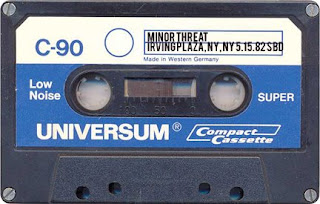 This show was recorded as the band was writing for the "Out Of Step" 12". This soundboard recording is almost as good as it gets. The band is tight, focused, and powerful despite having to play on a overcrowded Irving Plaza stage packed with rowdy New York punks. It's arguable that this recording could even warrant an official release because of it's excellence, even if the band takes way too much time between their songs.
It seems as if tensions between DC and New York punks were legitimate. Ian Mackaye delivers some snide stage banter about how inebriated certain crowd members are and mockingly refers to Harley Flannegan as a "rock star" and dedicates an impromptu dub cover of Government Issue's "Asshole" in his honor. The ignorance of late adolescence also prevails when Mackaye debases a female crowd member in a.... somewhat derogatory manner. Mackaye plays sardonic sideshow man between numbers and is pretty hilarious throughout the entire performance.
Springa of SSD seems to be the king of the pigpile since his backup vocals are so prominent throughout the whole set.
Overall, a spectacular document of the hardcore era. Listening to it makes you feel like you were there.
Track list:
1. Straight Edge
2. Seeing Red
3. Little Friend
4. Filler
5. Small Man Big Mouth
6. No Reason
7. Minor Threat
8. Stand Up
9. 12XU (Wire)
10. Bottled Violence
11. Out of Step
12. Asshole Dub
13. Screaming at a Wall
14. Guilty of Being White
15. Stepping Stone
16. In My Eyes
DOWNLOAD:
http://www.mediafire.com/?whyikkm2dzm
Posted by Chris Prorock at 10:25 AM 7 comments 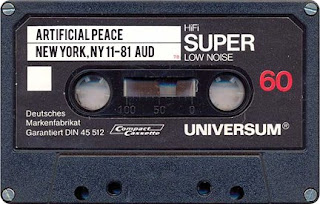 Artificial Peace was a grossly underrated hardcore band from Bethesda, MD. Perhaps the contrast of growing up alongside DC hardcore stalwarts such as the Bad Brains, Minor Threat, and Government Issue didn't help them get the attention they deserved. I suppose releasing only a somewhat mediocre split 7" with Exiled on Fountain of Youth and a random smattering of compilation tracks didn't help much either. They cut a session at Inner Ear studios with Don Zientara that was incredibly worthy of release, but for some reason it was shelved. These sessions produced the 3 great Artificial Peace tracks featured on the classic "Flex Your Head" compilation.
This audience recording is of average quality, but warrants a posting because of the spirited performance and the scarcity of any live recordings of Artificial Peace. In the future, I will post a great Artificial Peace soundboard recording from Peppermint Lounge as well the unreleased recordings cut at Inner Ear. Until then, enjoy this one.
Sorry, track listing not included.
DOWNLOAD:
http://www.mediafire.com/?tdmwttj3j2n
Posted by Chris Prorock at 7:36 AM 2 comments 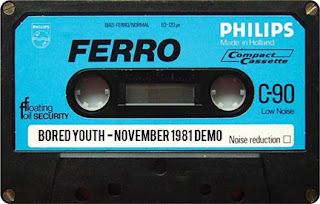 Bored Youth were geographical and chronological peers of Negative Approach, the Meatmen, and the Fix, hailing from West Bloomfield, Michigan. Although they weren’t as superior or influential as the aforementioned bands, it’s surprising that they didn't release a 45 on Touch and Go…. or a record at all for that matter. Regardless, this post showcases their November 1981 demo tape. The songs are emblematic considering the overall canon of Midwest hardcore at the dawn of the 1980s: barely outlasting the confines of 60 seconds and immediate. Nonetheless, it’s a respectable demo, especially the anthem “Outcast.”

This demo was pressed once under highly questionable circumstances by infamous crooks, Lost and Found. It was included in a box set consisting of material by the Meatmen, United Mutation, Impatient Youth, and White Flag. This demo was also included on the rare “I Estimated Your Worth Today” cassette which also featured demos recordings by Violent Apathy, The Fix, Negative Approach, Crucifucks, etc.

Members of Bored Youth went onto obtaining degrees in law and committing suicide.