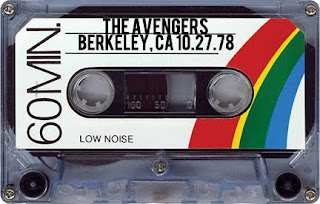 The Avengers began allegedly as an excuse to display then stylish punk fashion. When all was said and done, they were arguably the best pure punk band in all of San Francisco, let alone all of California. Like fellow Dangerhouse artists X without any of the artistic pretentions, Penelope Houston and her savage backing band elevated a simplistic form of rock and roll to a considerably higher potential. Houston was America’s indomitable rock and roll woman of the late 1970s before Chrissie Hynde came along and dethroned her. Regardless of the fact that the band never stuck around long enough to collect conventional mainstream achievements, they left a great posthumously collected album in their demise. It’s a minor tragedy that producer Steve Jones never actually wound up fully mixing it’s tracks.
This audience recording was made shortly before the Avengers folded in 1979. The recording quality is respectable, stemming from an above average audience source. The performance is ferocious, with Houston’s voice being the strongest point throughout. It’s interesting to hear the handful of songs that were excluded from the full length performed live. Some of these tracks have made it onto the two different collections that have come out since 1999. "Second to None" is introduced as "Baby", thus giving it yet another song title considering the Jones' Professionals called it "1-2-3" on a single B-side.
Overall, this show is a nice glimpse of what the Avengers could deliver live on stage.
Track list:
1. The American In Me
2. Open Your Eyes
3. Uh Oh
4. No Matyr
5. Lonely Girl (Jones)
6. Thin White Line
7. Promised Land
8. End Of The Word
9. White Nigger
10. Second To None
11. I Believe In Me
12. C'mon Everybody (Eddie Cochran)
13. Car Crash
DOWNLOAD:
http://www.mediafire.com/?iyfqnry1vle
Posted by Chris Prorock at 4:06 PM 4 comments 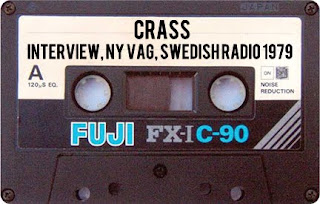 Hailing from Epping, Essex, England, Crass were the leaders of UK punk’s radical left. Although they would never categorize themselves as a leftist group, many of their ideals fell distinctively into this paradigm. As were well-known first-wave UK punk groups sang about the incentives of anarchy, Crass were surely the first band to do something about it. They defined themselves as a more virtuous option to the bands that used the spectacle of anarchism to move product. Crass refused all of the obligatory causes that most other groups rejected before them: organized religion, warfare, sexism, and ignorance. The differentiation was that Crass raised their position to that of sublimated fine art. In an age that was chiefly defined as apathetic and politically dejected, Crass were the principal builders of a template for many to draw from.
This radio interview is a great insight into the socio-political and economic ideologies that set Crass apart from the remainder of pedestrian sloganeering anarcho-punk groups of their era. Various members of Crass speak about their approach pertaining to releasing records independently, activism, gig violence, and political values.
This recording came to me updated but it seems extremely likely that it’s from 1980, considering the song selection features some tracks from “Penis Envy” and they make reference to new 45’s being released by Captain Sensible, Dirt, etc. If anyone has the exact date this was broadcasted, I’d love to know it so I can have the most complete information regarding this recording possible. It also seems likely that an English speaker initially asked the questions and Swedish translations of the questions were edited in afterward. The quality is great.
This recording is the first of many Ny Vag radio broadcasts that I will be making available on this archive. Ny Vag was a radio show that was broadcasted on Swedish National Radio, appearing on channel P3. Ny Vag was hosted by Jonas Almqvist who also performed in Ladernunnan and the Leather Nun. This radio show was incredibly important to the Swedish punk subculture because it gave listeners a opportunity to hear local acts as well as US and UK hardcore punk bands.
I have approximately 20 different Ny Vag shows and would love to acquire more. If you have any and would like to trade, please drop me a line through the email posted on this site.
DOWNLOAD:
http://www.mediafire.com/?0mzynzuyuei 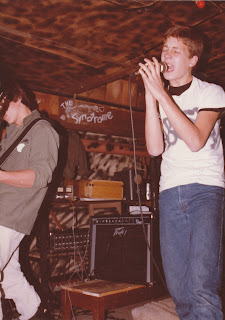 I’m very excited to announce that the house label for this blog, More Than a Witness Product, will be releasing the long lost 1984 demo recordings of the Young Republicans. I’ll be teaming up with the classic Connecticut hardcore label, Incas Records, to finally make this demo available. This release will be the second release for me after the CIA "God Guns Guts & More" reissue LP I have coming out in a month or so. Incas Records and I are working closely with Porcell to make this release the best we can.

The Young Republicans demo is one of the most elusive and obscure items in the history of such recordings. Until recently, I had all but given up on ever finding a copy of this demo as it had evaded me for a decade of looking. Being from Connecticut, one would assume that a copy would eventually turn up after rummaging through the tape collections of many first generation Connecticut hardcore people. Simultaneously, I received a copy of the demo via the singer Sam Collin while Porcell had taken his cassette copy to be digitally preserved in a friend's studio.

Shortly after they broke up, 3/4 of the Young Republicans would go on to play in Youth of Today. In fact, many tracks on the Young Republicans demo would later become tracks on the debut Youth of Today 7” on Positive Force; “Respect For Authority (None)” became “Stabbed In The Back”, “Backyard Bomb” became “Expectations”, and “High School Rednecks” became “Straightedge Revenge” note for note.

There will be a preorder for this release. This will consist of a limited version of the record as a way of paying thanks to the people who made the effort to order from the label. More information about this as the actual release date draws closer.

If you’re interested in carrying this record for a store or distro, please write me at the email posted on this site for wholesale prices.

The above photo was taken by Jamie Keever at the Anthrax in Stamford.

Posted by Chris Prorock at 6:47 AM 3 comments