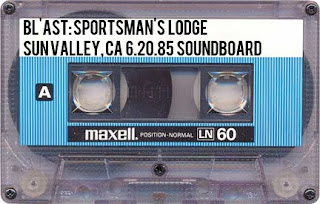 Hailing from Santa Cruz, CA and originally forming under the monicker M.A.D. (standing for Mutually Assured Destruction, of course) in late 1982, Bl'ast (the apostrophe was used to make their visual logo "more dynamic" according to vocalist Clifford Dinsmore) are of my favorite hardcore bands to ever exist. Detractors will often cite that they made a career out of imitating label mates Black Flag but this opinion doesn't lend itself to the fact that Bl'ast were a great band in their own right and definite forerunners of the stoner rock sound. Without question, guitarist Mike Neider and drummer Bill Torgerson selected a Dan Armstrong guitar and Ludwig Vistalite drums respectively because their heroes Black Flag made this look renowned. Henry Rollins mentions this briefly in a "Get In the Van" entry where he clearly discredits the band for being unoriginal and tacky.
Regardless of the fact that "Power Of Expression" LP has been permanently burned into my prefrontal cortex, I still get excited every single time it finds itself on my turntable. This soundboard recording is nearly just as powerful. This 1985 set recorded in Sun Valley, California showcases Bl'ast performing material that would find itself on their debut album shortly after. The sound quality is excellent and the mix is nothing to scoff at. This is a remarkable recording that should find itself in the collection of any self-respecting Bl'ast devotee.
Track list:
1. Our Explanation
2. I Don't Need It
3. Break It Down
4. E.I.B.
5. Fuckin' With My Head
6. School's Out (Alice Cooper)
7. Surf and Destroy
8. The Future
9. It's Alive
10. 12XU (Wire)
DOWNLOAD:
http://www.mediafire.com/?wlljwwmwd5m
Posted by Chris Prorock at 6:56 AM 4 comments 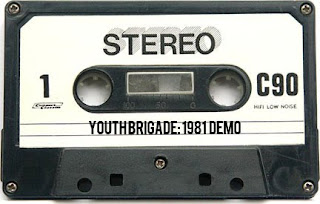 Youth Brigade (not to be confused with the band from Southern California with the same name) were a crucial band that was a part of first wave Washington DC hardcore. Youth Brigade was comprised of several members that had already been in bands from Washington; vocalist Nathan Strejcek sang for the Teen Idles and drummer Danny Ingram had previously been in the Untouchables. After playing their first show in March of 1981 at Washington DC venue Food For Thought, the band brought Bert Queiroz (bass) and Tom Clinton (guitar) into the fold. Shortly before Dischord released their sole record, Youth Brigade opened for Black Flag on their first ever trip to the east coast. The debut EP was entitled "Possible" simply because of an early Dischord fanzine advertisement which stated: "possible record from Youth Brigade soon". After the group disbanded, they appeared on the seminal "Flex Your Head" compilation and various members went on to form Double O, Peer Pressure, Second Wind, and Rain.
This demo has been bootlegged onto vinyl twice. It first surfaced in 1994 on the Ripe Harvest label as a split double 7" with the great No Labels from North Carolina. My copy is on green and pink vinyl. This material surfaced once again on vinyl in 2001 on a split LP with Minor Threat (which also featured their classic debut demo) on the Recollect label that was based in the Netherlands.
This demo features several tracks that were not rerecorded for any subsequent releases. "I Object", "Youth Brigade", "Bouncer", and "Snow Job" were only featured on this demo recording. The rest of tracks were rerecorded for the "Possible" 7" and the "Flex Your Head" compilation LP.
The sound quality is strong considering that this was meant to be used as a demo.
Track list:
1. I Object
2. Full Speed Ahead
3. Last Word
4. Waste Of Time
5. Youth Brigade
6. Bouncer
7. Snow Job
8. Moral Majority
DOWNLOAD:
http://www.mediafire.com/?mjezxyd5kzz
Posted by Chris Prorock at 12:05 PM 1 comments