CAUSE FOR ALARM: THE MALL, WASHINGTON DC, 7.3.84 AUDIENCE RECORDING 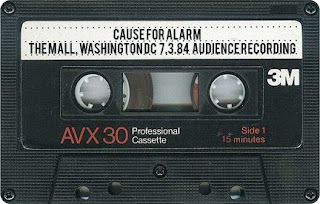 Cause For Alarm had its origins in New Jersey under the name of Hinckley Fan Club. After moving to New York in early 1983, the band changed their name to Cause For Alarm and quickly became stalwarts in the burgeoning NYHC scene. After releasing a exemplary debut record, the band dissolved due to differing opinions on the concept of Krishna consciousness. They original lineup had their last efforts included on the landmark PEACE double album on R Radical records. A few other songs from this session were also recorded but were never released. These tracks will be the subject of a subsequent post on this blog.

This audience recording captured on July 3, 1984 was a show on the "Rock Against Reagan" tour, as DRI and MDC were also on the bill. The recording is above average considering the technological limitations of the day and is certainly worth a download. Singer Keith Burkhardt is charismatic as he and the band tear through songs from their classic debut EP. 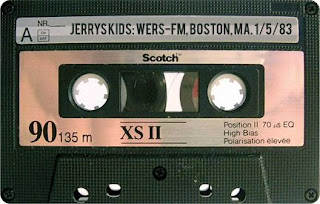 From the second this recording begins with a harsh scream stating the band's name, you know you're in for a breakneck set of fearless hardcore detonations. This set is comprised of songs of songs from the legendary "Is This My World" album.
The quality of the recording suffers slightly from overall distortion. It's logical to surmise that this problem stems from the recording process when the band cut this session at WERS-FM. This seems potentially unlikely as the FU's WERS-FM broadcast is considerably cleaner sounding. It's possible that this tape is the victim of a being dubbed from a multi-generated source. This radio broadcast may not be a flawless sounding recording, but I feel that it correctly showcases what a Jerry's Kids set was like in 1983: one part vigorous wall of sound and one part white lightning. It's actually quite rare when the abrasiveness of a bootleg recording can add to it's overall charm and I feel this is the case with this recording. This is an enjoyable recording and should be downloaded without delay.
DOWNLOAD:
http://www.mediafire.com/?53tjbytyjun
Posted by Chris Prorock at 1:02 PM 6 comments 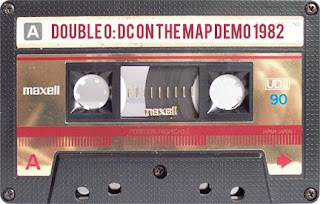 Today's post concerns the "DC On the Map" 1982 demo. This has been previously bootlegged in 1993 under the title of "Double Barreled" as a double 7". This bootleg double 7" comprised tracks from the band's three demos.
This demo shows the growth of the band between their demo and debut EP on Dischord/R&B. This demo showcases the band with a much more aggressive sound than their more sophisticated debut record. These tracks are more akin to Youth Brigade and perhaps Red C. This seems logical considering that Double O boasted ex members of both groups. The sound quality of this demo is somewhat noisy but is still quite enjoyable to listen to. This is pretty much a must for any early Dischord enthusiast.
DOWNLOAD:
http://www.megaupload.com/?d=5OVH1LFC
Posted by Chris Prorock at 10:06 AM 6 comments 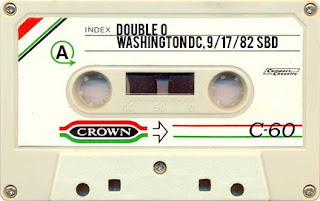 Double O were a band that hailed from Washington DC and featured an ex member of Youth Brigade. After the band split, ex-members worked as Dove and released the track, "Ambivalence" on the "Bouncing Babies" compilation album. Double O served as a crucial gap between the first generation of harDCore and the second generation Revolution Summer sound. Double O maintained a sound that was both powerful and melodic, somewhat akin to Faith and later on, Swiz. Double O released a self titled EP on Dischord/R&B. I always found it strange that this group was not included on the "20 Years of Dischord" box set retrospective.
This soundboard recording maintains an excellent sound. The mix is a good and the levels are just right. My recording was taken from a low generation cassette. Perhaps the band did not have the technical ability of harDCore stalwarts Minor Threat and the Bad Brains, but they made up for it with energetic and engaging performances. The set on this recording documents this.
DOWNLOAD:
http://www.zshare.net/download/62666133a4cecdd5/
Posted by Chris Prorock at 12:18 PM 3 comments