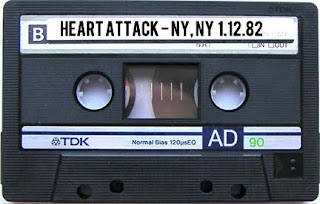 Hailing from Whitestone, Queens, the nucleus of Heart Attack was formed while the members were still all under the age of 18, ranging from 12 at the youngest and 17 and the oldest. Within the first several months of the band, they cut two humorous demos entitled “The Hitler Demo” and “Mojo Sessions”. These early recordings were teenage imitations of then current English punk bands such as the Clash and the Sex Pistols. After singer Jesse Malin and guitarist Jackie Flannagan stumbled upon a Bad Brains show at CBGB during the middle of 1981, they immediately decided to amend their own sound. They were reborn as a frenzied hardcore act that would serve to be a strong influence (like the Bad Brains had been to them) to future up and coming New York hardcore groups.
Heart Attack were responsible for the vinyl artifact of the New York hardcore scene. This three song 7” EP, “God Is Dead”, was a crucial document in the separation of New York independent music after the late 70s CBGB scene had faded. This record is probably the most sought after item to ever have come from the New York hardcore scene, topping out in an online auction at nearly a thousand dollars two years ago.
This live recording was captured near the dawn of the group. This is the earliest live recording I have ever seen in circulation of Heart Attack. It shows these guys as a band still in the process of trying to discover their own sound. It seems they have one foot immersed in the UK influenced melodic punk rock of the time and another in the rapidly developing style of New York hardcore. Two out of the three tracks from the debut "God Is Dead" 7" EP are performed live in this set along with other tracks that would eventually turn up on the first Heart Attack 12", "Keep Your Distance".
The source of this tape is a soundboard recording. The sound quality seems to suffer from some very minor generation loss. It seems likely that this is still a low generation copy of this tape as it came from a long time trader that prided himself on owning a considerable amount of live masters and low generation tapes. This is a very nice document considering when it was recorded during the band's existence.
This is the first of a few Heart Attack live recordings that I will make available on this archive.
Track list:
1. The Last War
2. You
3. I Don't Want You Anymore
4. English Cunts
5. Assassination
6. Shotgun 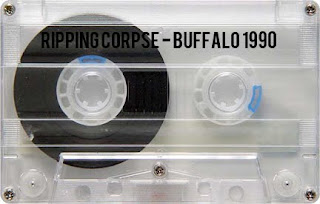 When my family moved to the shore, before I even got into hardcore, one of the first independent bands I heard about was Ripping Corpse. In eighth grade, a few friends who would eventually turn me onto hardcore played me some of their material and I dug it a lot. Their demos and "Dreaming With The Dead" LP are classic metal/hardcore that has become legendary in the underground music community.

The recording quality is that of an above average soundboard tape. The mix is a tad treble laden but overall the sound is excellent. The echo can be a bit distracting at times but it also adds to the power of this recording. This show was sent to me labelled "Buffalo, New York 1990." Does anyone have leads for a venue or more specific date?
1. Glorious Depravity
2. Dreaming With The Dead
3. Anti-God
4. Sadomasochism From The Grave
5. Wounds
6. Beyond Humanity
7. Chugging Pus
8. Sweetness
9. Rift Of Hate
10. Exhumation Days
11. Through The Skin To The Soul
12. Seduction Of The Innocent
13. Sickness of Will 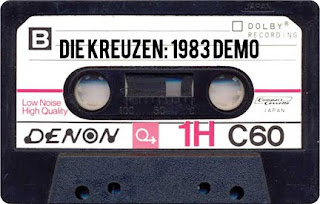 Occasionally, an extraordinary band will relinquish a cluster of demos prior to recording a proper release that simply rule, and even rival overshadow the release they were intended to prepare for. Perhaps the best example I can cite here would be the demos Black Flag cut in 1982 prior to recording "My War". Similar to these demos, before Die Kreuzen bestowed us their renowned self-titled debut full length they cut a batch of demos that rival most official releases from the time period and genre.
Like the 1982 demo that preceded the “Cows and Beers” EP, these 1983 demo recordings are an astonishing appetizer for the LP from 1984. These demos are equipped with an antagonistic attitude and a penchant for speed. One of the best things about Die Kreuzen is that could they could play hyper thrash while the songs remained surprisingly articulated. The playing is crisp while Dan Kubinski’s vocals are utterly illegible in the best manner possible.
The world would greatly benefit from having these demos come out officially on LP. If anyone knows how to contact the band, please drop me a line at the email I have posted.
Track list:
1. Sick People
2. No Time
3. Pain
4. Hate Me
5. No Name
6. Don't Say Please
7. In School
8. This Hope
9. All White
DOWNLOAD:
http://www.mediafire.com/?w3d4m12awyn
Posted by Chris Prorock at 7:05 AM 5 comments