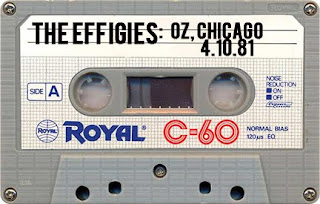 The Effigies were one of the first punk groups to spring up in Chicago, around late 1980. While this claim seems somewhat implausible considering Chicago’s rich musical tradition, it makes sense when you consider that blues, generic bar rock, and even disco dominated most clubs in the city. The open-mindedness of clubs like the Oz (where the “Busted At Oz” compilation was recorded, obviously) and O’Banion’s helped give the first generation fringe acts a chance at honing their chops in public.
Any disciple of 1980s American hardcore knows that the Effigies released a slew of incredible records; practically everything recorded from 1981-83 is faultless and are generally considered to be classics of the genre. They haven’t been as posthumous celebrated by the critics as their local brethren Naked Raygun or Big Black (perhaps because they weren’t as sonically pioneering), but the Effigies have survived amongst those interested in American hardcore that wish for the much appreciated basic aggression of the genre melded with the artistic finesse of UK post punk bands like Killing Joke, the Ruts, and the Stranglers.
Lyrically, it’s obvious to me that the Effigies were intelligent enough to basically withdraw from writing about the emblematic yet already cliché political themes sweeping the hardcore underground. They even caught some heat from a few known fanzines for refusing to carry the usual banners like the other then contemporary bands with names comprised of seemingly endless permutations of words such as: “state”, “control”, “youth”, “faction”, or “army”. Instead the group focused on well placed ambiguous themes (well, at least to your average 18 year old skinhead) that their songs have become known for.
Here’s an outstanding Effigies soundboard tape that I received not long ago from a longtime tape trader. This performance is one that is certainly enjoyable to listen to; the songs are delivered with a rough edged execution while totally hitting the target with clever melodic achievement. I especially dig the slapdash guitar solo in “Quota” and the incensed pace of “Strongbox”, two of their all time classic tracks. The quality of this recording is quite good; it’s a low generation soundboard recording that’s really documents what these dudes could do live. I was thinking about performing a slight EQ to give this tape a little more treble but I decided to keep it as is because this is how it sounded the night it was recorded: mighty, thick, fierce, and wholly uncompromising.
I’m uncertain if this is the entire set from this night due to it’s somewhat short length of 18 minutes. Then again, it seems that some of the between song silences have been removed so I suppose it’s possible this is the complete gig. If anyone has a different version of this gig, I’d love to obtain it.
Track list:
1. Body Bag
2. Coarse in Vain
3. Guns or Ballots
4. Quota
5. Strongbox
6. Techno’s Gone
7. Below the Drop
8. Patternless
DOWNLOAD:
http://www.mediafire.com/?ayniuphq67c29pk
Posted by Chris Prorock at 5:30 PM 4 comments