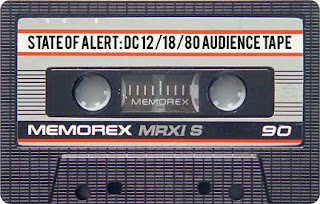 When asked about the live performance history of State of Alert, Henry Rollins once claimed that the group's performances "were eleven to fourteen minutes in duration because the songs were all like forty seconds... and the rest of the time we were going, 'Are you ready? Are you ready?' Those gigs were poorly played songs in between 'Are you readys?" Henry did have a point since these guys never showed much instrumental or song writing prowess, but they certainly can be regarded as one of the purveyors of American hardcore by serving as a launching pad for later bands like Negative Approach and Agnostic Front.
It seems Rollins was also correct about this recording because the total length is just over 12 minutes and the playing certainly isn't virtuosic. Regardless, this is an enjoyable audience recording of a historic group that documents their teenage vitriol. The sound quality is decent considering the time and place this performance was recorded.
Track 9 seems to consist of an unreleased song not found on the "No Policy" 7", "Flex Your Head" compilation LP, or even the 1980 SOA demo cassette. Any information regarding this track would be appreciated.
Setlist:
1) Gonna Have To Fight
2) Riot
3) I Hate the Kids
4) Gang Fight
5) Public Defender
6) Draw Blank
7) Disease
8) Warzone
9) Unreleased song (???)
10) Stepping Stone 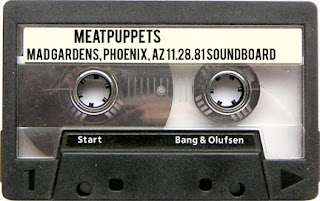 Before the Meat Puppets began releasing records showcasing their sun damaged style of country punk, they were experts at constructing wild-eyed, art damaged hardcore. Their debut EP "In a Car" ranks as one of my favorite hardcore records of all time because of its courageous and reckless spirit. The five tracks on their debut 7" EP speed along at a face-melting velocity but seem to move in multi-modal directions depending on the track that you're listening to. The lyrics are often totally incomprehensible and when they were printed they were even more baffling. When considering all of this, it makes total sense that your average hardcore lunkhead wanted to spit all over them when they opened for label mates Black Flag.
This soundboard recording documents the Meat Puppets tearing through a total of 33 songs from their first 7", first LP, and features a whole smattering of oddball covers ranging from the Grateful Dead to Black Flag. It is pretty amazing to think that a hardcore band could even muster the patience to perform a set that is an hour in length. This recording clocks in at just under one hour and the band uses the cover song piss takes to regain their energy to shred on the faster paced songs. Like their records from this time period, the overall performance on this recording is sloppy but highly engaging.
Setlist:
1) Saturday Morning
2) Our Friends
3) Playing Dead
4) Electromud
5) Unjust
6) Reward
7) Milo, Sorghum & Maize
8) H Elenore
9) Blue-Green God
10) Melons Rising
11) Dolphin Field
12) In A Car
13) Tumbling Tumbleweeds (Bob Nolan)
14) Love Offering
15) Litter Box
16) Meat Puppets
17) Teenagers
18) Hearts
19) Foreign Lawns
20) The Gold Mine
21) Walking Boss
22) No Values (Black Flag)
23) Big House
24) Magic Carpet Ride (Steppenwolf)
25) Reach Out (Iíll Be There) (Four Tops)
26) Rabbit Fighter (T-Rex)
27) Down on the Corner (CCR)
28) Standing on the Verge of Getting It On (Funkadelic)
29) I Know You Rider (Grateful Dead)
30) I Am A Child
31) Purple Haze (Jimi Hendrix)
32) Out in the Gardener
33) 1970 (Stooges)
DOWNLOAD:
http://www.megaupload.com/?d=4UMVX2QM
Posted by Chris Prorock at 10:01 AM 4 comments