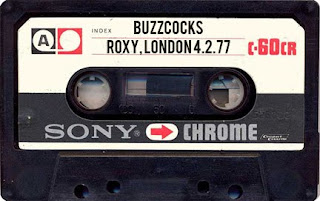 Many people truly enjoyed the first Buzzcocks post that I submitted here on More Than a Witness, so here is yet another fantastic show recorded during early 1977. Making their live debut in July 1976 (providing support for the Sex Pistols second ever Manchester gig), this excellent soundboard recording documents the group shortly after they made the transition from Howard Devoto (he returned to college for one year than formed the mighty Magazine shortly after leaving a pursuit in academia) to Pete Shelley as group vocalist. Shelley's high-pitched, melodic vocals were a standout during the first wave of English punk because they stood in stark contrast to the gruff, atonal stylings of both inferior punkers and the majority of pub rock holdovers.
Sporadically, a soundboard recording will surface that is nearly flawless. This is one of those documents. This soundboard recording is bright, evenly mixed, and truly captures the spirit of seeing one of the greatest punk groups of all time growing up in public.
Tracklist:
1. Orgasm Addict
2. No Reply
3. Get On Our Own
4. Fast Cars
5. What Do I Get?
6. Friends of Mine
7. Sixteen
8. Time's Up
9. Oh Shit
10. Boredom
DOWNLOAD:
http://www.mediafire.com/?ln5z5nzmwmm
Posted by Chris Prorock at 4:53 PM 4 comments