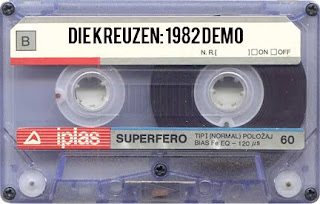 Die Kreuzen are simply one of the best hardcore bands to ever exist. They were first known as the Stellas and quickly changed their name to a rough German translation meaning “the crosses” or “sign of the cross”. After contributing tracks to the “Charred Remains” cassette compilation and the “Master Tape” compilation album, they unleashed the mighty “Cows and Beer” 7” EP, which ranks as one of the greatest hardcore records ever produced.

The period prior to “Cows and Beer” consists of the aforementioned compilation tracks as well as two extraordinary demo tapes. These demos are better than most other bands' officially released output from the time period. This specific post will focus on the 1982 demo. I will post the 1983 demo in the near future.