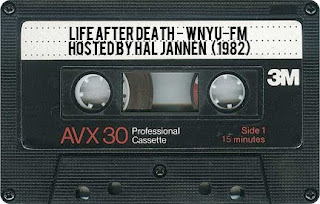 Here is the second tape of "Life After Death" that has been culled from the large stash I recently received for the purpose of archiving here. Again, these tapes are truly a fun listen and almost bring you back to the period when they were originally recorded. The upcoming show announcements are simply jaw-dropping.
The track listing is heavy on the English hardcore punk of the time which is personally much less interesting than the New York hardcore records that were coming out then. I suppose labels like No Future and Riot City could actually afford to send promotional copies for airplay, as where the local upstart labels could not.
This posts represents 2 different original broadcasts. The exact date of either original broadcast is unknown but the cassette says they’re both from 1982. Both broadcasts are incomplete because not every song was recorded. Either the original taper didn’t include every track because he already had the records of the songs being broadcasted or he simply didn’t care to include the tracks omitted due to taste.
Thanks to Greg Fasolino for supplying this recording.
Track list:
The Maniacs: Chelsea '77
Crass: Have a Nice Day
UK Subs: Plan Of Action
Crass: You Can Be Who?
The Expelled: Blown Away
Descendents: I Wanna Be a Bear
Crass: Big A Little A
The Wall: Ghetto
GBH: Time bomb
The Abused: Drug Free Youth
Legionaire's Disease: Rather See You Dead Than With Wool On Your Head
Infa Riot: Emergency
The Dark: John Wayne
The Fits: Straps
Dead Boys: Sonic Reducer
DOWNLOAD:
http://www.mediafire.com/?mhdjwkyz50e
Posted by Chris Prorock at 11:51 AM 0 comments 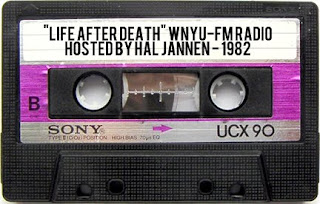 This cassette is the first of numerous classic New York hardcore radio shows that I will be archiving. Not only do I truly enjoy listening to these broadcasts, but also I take pleasure in making these permanently available here on this archive. These classic radio shows are excellent snapshots of the various scenes as they were happening.
Greg Fasolino provided all of these cassettes from his collection. He originally recorded these radio shows as they were first broadcast on WNYU-FM. Without Greg hanging onto these cassettes for nearly 30 years, these broadcasts would perhaps be lost forever. More Than a Witness salutes you, Greg.
“Life After Death” was a weekly hardcore punk radio show hosted by Hal Jannen. “Life After Death” was the successor to Tim Sommer’s excellent “Noise The Show” on WNYU-FM. Jannen’s radio show was originally known as “Hal The Show” as a nod to Sommer’s show. It was renamed to “Life After Death” via an on-air contest.
This posts represents 2 different original broadcasts. The exact date of either original broadcast is unknown but the cassette says they’re both from 1982. Both broadcasts are incomplete because not every song was recorded. Either the original taper didn’t include every track because he already had the records of the songs being broadcasted or he simply didn’t care to include the tracks omitted due to taste.
These 2 broadcasts are worthy of note because they feature demo tracks from Heart Attack and Die Kreuzen. There is also a brief appearance from Dave of Reagan Youth and Adam of the Young and the Useless plugging a show they were playing that night at the Mudd Club.
Track list:
Crass: Asylum
Germs: No God
Heart Attack: From What I See (demo)
Die Kreuzen: Pain (demo)
Zero Boys: Drug Free Youth
False Prophets: Good Clean Fun
Discharge: Blood Runs Red
SS Decontrol: Boiling Point
Angry Somoans: Get Off The Air
999: Nasty Nasty
Crass: Systematic Death
Misguided: Doomsday
Notsensibles: I’m In Love With Margaret Thatcher
Nig Heist: Walking Down the Street
Skrewdriver: Anti Social
Dirt: Democracy
Interview with Dave Insurgent (Reagan Youth) & Adam Trese (Young and the Useless) 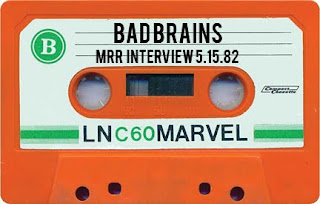 After a lapse in posting here on the archive, here is a classic Bad Brains interview from Maximum Rock & Roll Radio conducted by the magazine’s founder, Tim Yohannon.

This interview was captured soon after the Bad Brains migrated to Manhattan from their home base of Washington DC. 1982 also saw the first Bad Brains nationwide tour. The infamous encounter with Randy “Biscuit” Turner of the Big Boys occurred briefly before this interview took place. This incident has been written about extensively in a variety of publications such as American Hardcore. The synopsis of the story is that the Bad Brains stopped in Austin, Texas to play with the Big Boys and the Dicks. Immersed in Rastafarian ideology, the Brains took strong offense to the homosexual lifestyle of the Big Boys vocalist and they sure let him know it by defacing his property and leaving him a note that denounced homosexuality. They continued on their tour with a bag of stolen weed and with a new wing of detractors in Texas. This incident began to follow them as they hit subsequent cities on their ’82 tour.

Considering the then recent Austin skirmish, it’s quite ironic that interviewer Tim Yohannon opens up with a query regarding breaking down boundaries only to be followed up with a response that touches upon diversity by way of Jah. A sense of tension seems to develop between Yohannon and the Bad Brains regarding their ethnic status and where it fits within the burgeoning hardcore scene. Yohannon is somewhat relentless in his questioning regarding this topic. I don’t know what’s more bizarre; MRR presenting a program that’s incessant in pushing the envelop toward uneasiness or giving the platform to a band that are firm believers in religious doctrine. Oh, how the times have changed.

The quality of this short interview is great. The recording comes from a first generation master cassette that was recorded off the radio as the interview happened.