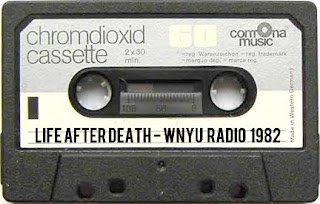 Here is the fourth installment of the WNYU radio show "Life After Death" to be uploaded to this archive. This is from is a recent batch of classic New York hardcore radio shows from 1982-83 that was sent to me for digitizing for purposes of being archived here. This tape is an amalgam of two different broadcasts and came to me on one cassette tape. It's likely that these two broadcasts are sequential in when they first were transmitted. The track list below represents the full songs that were featured on the cassette I received.
The centerpiece of this cassette is indubitably the interview segment with Bobby Steele of the Undead. He's fresh out of the hospital and dying to drink. Steele comes off as a real wreck with his seemingly careless on-air demeanor. He also expresses his frustration with the local scene and the lack of support for new bands. Janner's on-air personality combined with Steele derelict nature make for one of the most awkward interviews I've ever heard.
Thanks to Greg Fasolino for supplying this recording.
Track list:
Polemic Attack: Manipulated Youth
One Way System: Just Another Hero
Crass: Rival Tribal Rebel Revel
Mourning Noise: Fighting Chance
Angelic Upstarts: Last Night Another Soldier
The Deformed: Police Brutality
The Undead: Interview/A.M. Pain
The Lewd: Polluted Brain
Skrewdriver: Back With a Bang
Angry Somoans: Right Side Of My Mind
The Stimulators: I Got a Right
Lama: Tanaan Kotona
Code of Honor: And We Fight
DOWNLOAD:
http://www.mediafire.com/?nz0mzyme1tz
Posted by Chris Prorock at 2:07 PM 0 comments 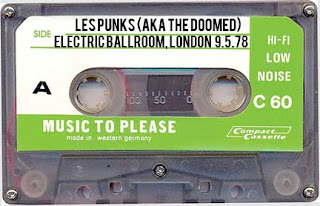 Towards the close of 1977, the Damned were promptly self-destructing. Guitarist Brian James had expressed interest in adding an additional guitar player to round out their sound. Robert “Lu” Edmonds was drafted for this purpose immediately before the sessions for “Music For Pleasure”. Although I like this album, it’s terribly mediocre when compared to their debut release. It probably didn’t help that the group was falling to piece and the drummer of Pink Floyd was behind the controls for “Pleasure”. February of ’78 saw Scabies walkout. Several different drummers tried to fill his shoes (even Jon Moss later of Culture Club) but this was the first nail in the coffin of the Damned. When Brian James quit soon after Scabies, they were finished.
In August of ’78 the Damned reformed with James to play a proper last gig at the Rainbow in London. They smashed their instruments during the climax of the performance and the punk world thought this was unquestionably the conclusion of the Damned.
The individual members of the Damned had a try at solo efforts that went nowhere. Thus, the Les Punks (also later known as the Doomed) were formed. Brian James had copywritten the Damned name preventing Vanian, Sensible, and Scabies from using the name to perform. Before Algy Ward (previously of the Saints) joined the band, friend and supporter Lemmy Kilmister of Motorhead on bass. Thus, the lineup on this recording is Dave Vanian on vocals, Captain Sensible on guitar, Lemmy Kilmister on bass, and Rat Scabies playing drums.
The source of this show is an audience recording. The quality is slightly better than average considering it's source and the probability that it's fairly generated from decades of trading hands amongst collectors. Regardless, it's a scarce historical document of the Damned with Lemmy sitting in.
Track list:
1. Jet Boy Jet Girl (Elton Motello)
2. Stretcher Case
3. Anti-Pope
4. Second Time Around
5. Problem Child
6. Silver Machine (Hawkwind)
7. Burglar
8. Looking At You (MC5)
9. Help (Beatles)
10. Kill (Alberto y Los Trios Paranoias)
11. Stab Your Back
12. City Kids (Motorhead)
13. New Rose
14. I Feel Alright (The Stooges)
15. Neat Neat Neat
DOWNLOAD:
http://www.mediafire.com/?minnmgmnzmm
Posted by Chris Prorock at 8:57 AM 2 comments 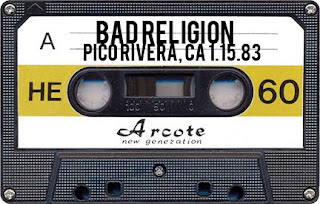 Out of the multitude of hardcore groups that performed around Los Angeles in the early 1980s, Bad Religion may be the last band you'd ever select for everlasting fame. The band was marked by frequent personnel changes and quality-fluctuating performances. Then high school senior, Greg Graffin, imitated the inceptive Brit-isms of other Orange County groups such as Agent Orange, The Crowd, and the Adolescents with neither the same pop craft or hardcore vitriol. "How Could Hell Be Any Worse" in hindsight is regarded as an Los Angeles hardcore classic but doesn't deviate from the then norm of the relentless polka beat that seemed to fade into the background of ten-band hardcore shows of the period.
Bad Religion released "Into the Unknown" and still regarded as the ultimate LA hardcore embarrassment. How is a teenage kid with chain-laden motorcycle boots supposed to get into a Rush modeled, synth-heavy platter anyway? After this release caused the band to demobilize for a few years, they returned stronger than ever. The mid-1980s saw the birth of the band's strongest period of albums: "Suffer", "No Control", & "Against The Grain". As all of the first-wave and second-wave LA hardcore punk groups broke up, Bad Religion was really starting to get their bearings.
This short 26 minute, 9 song recording boast soundboard quality. This is a respectable live document of the first incarnation of the band and and also a fun listen. Enjoy!
Track list:
1. Latch Key Kids
2. Fuck Armageddon... This Is Hell
3. Slaves
4. Pity
5. New Leaf
6. Doing Time
7. Bad Religion & Politics
8. Damned To Be Free
9. Faith In God
DOWNLOAD:
http://www.mediafire.com/?tmbjifcm0nz
Posted by Chris Prorock at 6:53 AM 2 comments 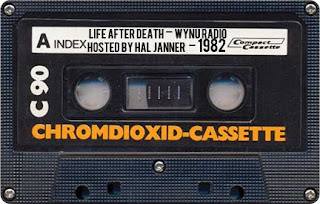 After a real dry spell regarding posts, I've really been cranking them out as of late. Here is the third installment of WNYU's "Life After Death" radio show recorded sometime in 1982. Unfortunately the original tapes do not provide specific information regarding the exact broadcast date. Unlike the previous broadcasts I've posted (tapes 1 & 2), this material seems to be from one sole broadcast.
The most interesting aspects of these broadcasts for me are the interviews. Included in this show is a brief False Prophets interview.
I have 13 (!!!) other "Life After Death" broadcasts that i will be posing on this archive so that they will be saved from obscurity. If you have any classic regional hardcore punk radio shows in your collection that you think would fit nicely on this site, please write me an email.
Thanks to Greg Fasolino for supplying this recording.
Track list:
MDC: John Wayne Was a Nazi
One Way System: Give Us a Future
The Stimulators: Loud Fast Rules
Charge: Destroy the Youth
Crass: Big Hands
Discharge: Society's Victim
Vice Squad: Living On Dreams
False Prophets: Interview
GBH: War Dogs
Crass: Nineteen Eigthy-bore
Discharge: Hear Nothing See Nothing Say Nothing
Wire: Dot Dash
Flux of Pink Indians: Tube Disaster
Crass: Do They Owe Us a Living?
The Abused: War Games
Infa Riot: Power
DOWNLOAD:
http://www.mediafire.com/?kjudorozynz
Posted by Chris Prorock at 10:15 AM 1 comments